A few weeks back, on September 27th and 28th, I traveled north to the sleepy town of Andong (population approximately 160,000) for the 2014 Mask Festival (side note: check out the vlog post here!). Spanning ten days, the festival featured masks from countries around the world and offered a fair number of international maskdance performances, as well as other kid-friendly acivities like mask-making, a giant trampoline, and one of those pools with giant plastic bubbles you get inside of in order to walk around on water! If you’re like me, it’s not that you’re too old for such shenanigans…you’re just too big. So as a consolation prize you can wander around the souvenir and discount shopping tents, eat your fill at one of the many food booths that line one stretch of the festival grounds, and check out the mask exhibits!

Welcome to the Mask Festival! 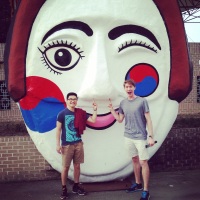 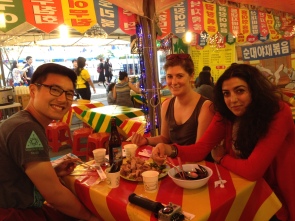 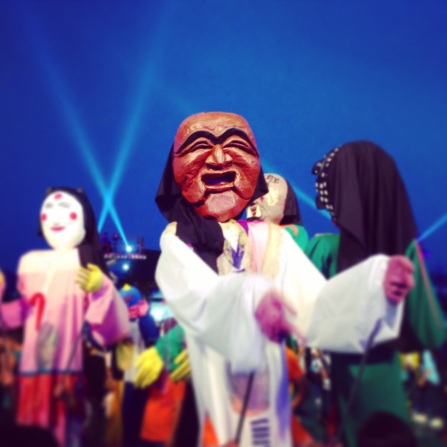 Finally, someone here who’s taller than me.

The ajummas with whom I got jiggy. 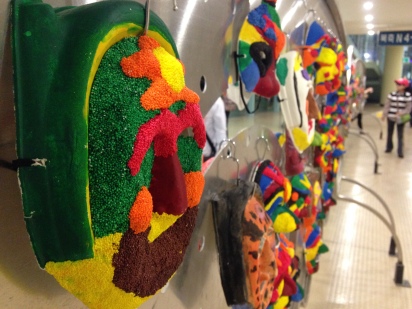 Masks kids made in school…I think. 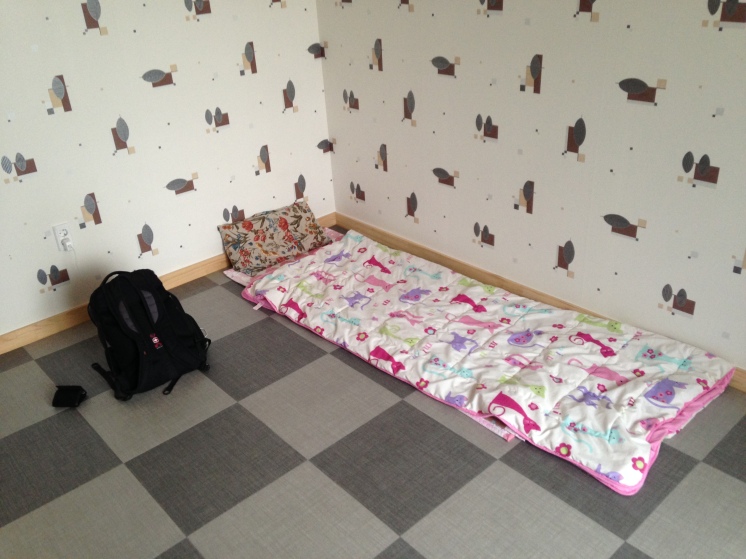 For me, the highlight of day one came when I got my groove on with a bunch of ajummas (a term used to address married women over the age of 70) at an impromptu dance party that took place right before all these groups of mask-clad older women and a few kid groups performed on a nearby stage. They seemed quite impressed with my moves (e.g., the twist, the moonwalk, and a few jazzercise combos) and gave me a round of applause for my ridiculousness at the end of the song. I guess sometimes making a connection with people means being willing to make a fool of yourself!

Ayesha on a swing. 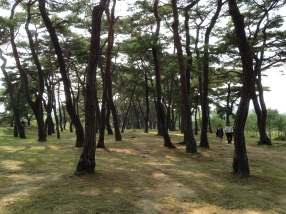 At the entrance to the temple. 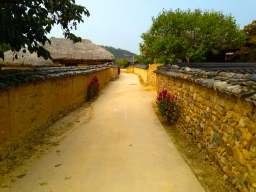 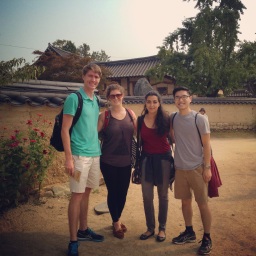 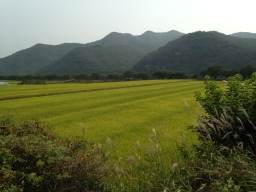 Traditional slippers made of straw. 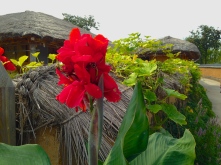 The second day of the festival I headed out of the city to Hahoe Village, a historic Korean village and World Heritage Site that Queen Elizabeth II herself has visited. From the main festival site in downtown Andong, it was about a 50-minute bus ride, and another 10 minutes by shuttle, before arriving at the village. Once there, you can wander the narrow, winding streets and peer over the stone walls (if you’re tall enough) to peak in at traditional Korean homes (called, hanok), and go for a relaxing stroll while snapping photos of the quaint, rice paddy-tiered countryside. Additional cultural mask performances were also presented on a stage set along the river in town. Food choices there were a little limited, so it might behoove you to bring your own snacks if you go. And for a bird’s eye-view of Hahoe, you can take a 3,000-won boat ride across the river and set out on a 15-20 minute hike up Buyongdae Cliff. Fyi, the 3,000-won you shelled out on the way there covers your return trip! 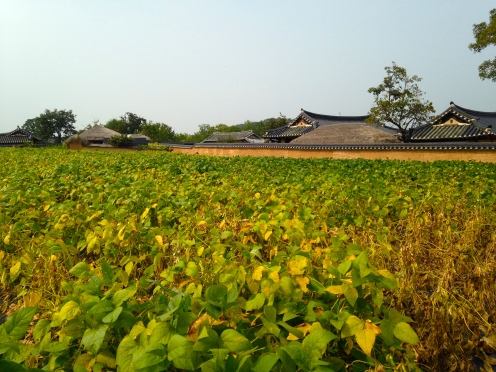 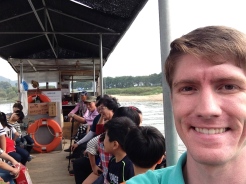 Made it to the top!

In the early evening I returned to the Andong Intercity Bus terminal (which is actually located a good 30-40 minutes away from downtown by bus, about halfway between the main festival site and the folk village), to make the 3-hour return journey to Ulsan.

Overall, I enjoyed the festival but was a little underwhelmed. I was originally looking forward to making a mask, but decided against it when I saw that the materials weren’t of the greatest quality. Some of the maskdance performances seemed very thought-out and authentic/professional, though most featured younger performers who a) seemed lacking in performance experience and b) didn’t seem to know quite what they were supposed to being doing while on stage. Perhaps my expectations were too high, or maybe the calibre of the invited groups was abnormally low this year. Either way, I’m glad I went…it was nice (really!)…but I wouldn’t say it’s something I’d do again.

I wish I could give a more positive, enthusiastic review. Something like, “Yes! The Andong Mask Festival is AMAZING! Your experience here won’t be complete without it!” …But I can’t. Not if I’m being completely honest. Sorry… Do go and check it out, though. If nothing else, it’s something you should do once to say you’ve done!

There was an error retrieving images from Instagram. An attempt will be remade in a few minutes.